Why was the Gratitude Awards Program created?

Young people are faced with countless challenges, which often seem insurmountable. However, they also have incalculable opportunities to impact their neighborhoods, schools, and communities in powerful and positive ways. PublicServiceNV was eager to engage, educate, and recognize Nevada youth, who create their own projects to meet community needs. Therefore, PublicServiceNV created the Gratitude Awards Program, which was inaugurated in four CCSD high schools during the 2016-2017 school year.

Since then, PublicServiceNV Board members have interacted with more than 2,500 CCSD students about their own empowerment opportunities through the Serve.Learn.Inspire. Civic Engagement Education Program. PublicServiceNV created a new civic engagement model through this 10-lesson curriculum, which includes lessons, self-reflections, team activities, and supplemental materials.

It takes dedicated teachers to make all of this work, and PublicServiceNV “Faculty Champions” are these education and engagement heroes. They invite PublicServiceNV Board members into their classroom to teach Serve.Learn.Inspire., and they work with their students to encourage them to convert the “learning” into “doing” by participating in the Gratitude Awards Program.

PSNV Salutes our 2018-2019 Faculty Champions, their Schools, and/or Programs:

Each year, Gratitude Awards recipients benefit from being:

Let us now take a moment to appreciate these magnificent students and their contributions. 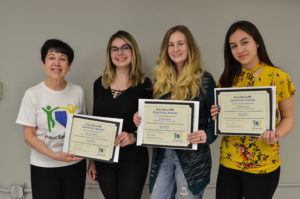 Upon doing our research, we found the Animal Foundation, which is a nonprofit organization that thrives on donations for the animals that come into the shelter. We decided to help with donations and set up an Instagram page to spread the word about our plan. We only directed it to our school community, friends, and family.

We collected several items, including: a case of wet cat food, dry food, several toys, containers of peanut butter (the dogs love peanut butter), and towels. These items will help more than 100-150 animals that are being sheltered each day.

Inspiration for this Project (as described by the team leader, Michaela Briggs)

As a team, we wanted to find a way to help the Animal Foundation and the animals they rescue. We contacted them, and they sent us a variety of things they needed, including: a list of everyday items that are always needed for the animals, an Amazon wish list, and ideas about different ways that we could help them without volunteering directly due to age restrictions.

By doing this project, we learned a lot about different communities and how doing one small act can help so many. It’s an amazing feeling knowing that we helped more than 100 animals and knowing that they feel comfortable, where they are being sheltered, and not suffering from not having anything.

Due to the nature of the tasks required for production of a musical, we decided to focus on third, fourth, and fifth graders. All students were given the opportunity to participate in workshops, which we designed to build student capacity in the areas of singing, dancing, and acting. Following the workshops, students participated in auditions and casting.

Inspiration for this Project (as described by the team leader, Night Kjenstad)

Our team chose to focus on reaching out into the community with the Las Vegas Academy’s mission of integrating the arts. We chose Walter V. Long STEAM Academy as a partner, because they have a high percentage of students, who have little to no exposure to the arts. Also, faculty members were excited about creating a musical at the elementary school level.

The workshops to teach singing, dancing, and acting impacted more than 150 students. Next, the casting for the musical, resulted in a cast of more than 50 students. These students have had the opportunity to interact with team members in choreography, acting, technical, and set creation aspects of theater.

Teachers and staff at Walter V. Long STEAM Academy also had an opportunity to work with our team, which resulted in both sides learning skills. The benefits of experienced educators working with young people, who are passionate about their emerging crafts, have been very impactful for everyone involved.

Thank you for this amazing opportunity.

As described by team leader, Night Kjenstad, “This experience has been a one-of-a-kind for the elementary students, and several of them have actively sought entrance into middle school arts magnet programs because of this opportunity.”

In addition, three Walter V. Long STEAM Academy administrators/teachers attended the awards event at the Las Vegas Academy. They shared the story of one student who participated in this musical adventure. Because of a profound speech challenge, he was both friendless and bullied. However, this experience allowed him to participate fully as a singer and actor and, because of this opportunity, he now has friends and engages more fully in school. 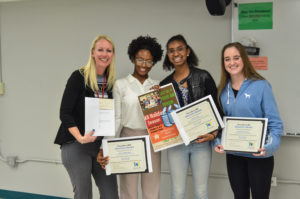 Teaming up with the Las Vegas Rescue Mission, we discovered opportunities to support the staff. We were able to provide aid with the preparation of dinner meals for the homeless population in the local area. We helped organize the thrift store in the Las Vegas Rescue Mission facility to ensure cleanliness in the store and to present articles of clothing in their best condition. The majority of the customers are low-income persons so this helps them access pieces of clothing, electronic appliances and/or accessories, furniture, and children’s toys with low and affordable prices.

Our team provided assistance, which enabled up to 15 staff members to perform other duties so that they could have more time to directly help the homeless more. Also, each team member donated money to help feed the homeless clients.

Inspiration for this Project (as described by team leader, Aaliyah Muhammad)

We chose to serve the homeless community, because when riding the buses to and from school in downtown Las Vegas, we see a constant high population of homeless people outside. We see them for blocks, particularly around north Fifth Street. We wanted to do anything that we can to help the homeless community.

By working with the Las Vegas Rescue Mission, whether it be staffing, volunteering, sheltering, or feeding people, we knew it would all benefit the homeless community in some way. Without staff, the rescue mission would not have certain things, such as an organized thrift center or a furniture warehouse that helps the homeless shelter themselves. Staff helps give tours so the homeless feel comfortable and accepted. Staff and volunteers are the face of the Las Vegas Rescue Mission and welcome these community seekers.

This experience was more than a project to the team. We  spent lots of time together, coming up with ideas and sharing our knowledge of the community that strengthened our beliefs and perspectives on learning. We bonded and enjoyed each other’s company, especially with our balanced levels of work.

During the Gratitude Awards event at the Las Vegas Academy, students learned that the average donation to the Las Vegas Rescue Mission totals between $5 and $10. According to the rescue mission, the value of the team’s directed donation is even more meaningful, because Las Vegas Academy students chose to have this donation serve the needs of our community’s homeless.

The team also visited the Las Vegas Rescue Mission’s website and learned that a sum of $2.17 can provide one meal for a homeless person. With this information, team members created posters, which they circulated among families and friends with the hope that these posters will grow the contributions even more. 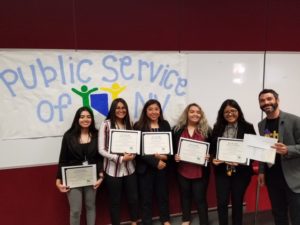 We created a donation drive for gently used clothing, shoes, and other necessities. We also hosted a “Miracle Minute” at our high school. The money we raised from the “Miracle Minute” helped us construct hygiene kits with a multitude of basic hygienic supplies.

This project was much bigger than our team and involved the support and help of our own school community. We wanted to spread the word of our project and Key Club, National Honor Society, and the PAL program were eager to help. Key Club not only encouraged people to donate but they themselves donated more than $100 in hygienic items.

Members of the National Honor Society helped us organize and package the clothing that we received so that they could be readily donated to the Nevada Partnership for Homeless Youth.

Teachers and students of the PAL program always offered a helping hand, either by posting flyers around the classrooms or by donating clothes. We are continuously grateful for their help. One act of kindness always leads to another.

In addition, for several Wednesdays, we volunteered at a local church to help prepare and serve food to the homeless.

Inspiration for this Project (as described by team co-leaders, Alvi Galindo and Britney Martinez)

Before we began our project, we knew that we wanted to create something that would benefit a community that was in need. Upon doing some research, we realized that the homeless youth are a community that not only need help but also greatly populate the city of Las Vegas.

Las Vegas has one of the highest homeless populations in the country, ranking number eight nationwide for homelessness. Statistics could say everything about poverty, but they can’t even begin to comprehend what the actual life of a homeless person is like.

It was important for us to give back to this community because, more often than not, people have preconceived notions about the homeless or shrug off these staggering reports. We wanted to change this.

We learned that our volunteering at the local church was not easy. The rooms were very small and crowded, making it hard to move around when trying to prepare the food. However, it was always an amazing experience working with the other volunteers and being surrounded by people, who cared about the same cause.

It was also exciting to meet people with different backgrounds and hearing the colorful stories that they did not hesitate to share. We met people who have battled with tragedies but still smile like kids when we gave them an extra serving of cranberry sauce. The room was always lively, as everyone who came would chatter amongst themselves and beam with happiness when serving time came. It reminded us that the little things can truly make someone’s day.

By the end, we fed hundreds of homeless people, raised more than $250 with the “Miracle Minute,” assembled 90 hygiene kits, and donated more than 20 boxes of new and gently used clothing.

During the Gratitude Awards event at Las Vegas High School, the executive director of the Nevada Partnership for Homeless Youth addressed the students. He told them that their project and generous financial donation demonstrate that students can serve, learn, and inspire with their acts of kindness. He invited the 200 people in attendance to learn more about (and get involved with helping) the 16,000 homeless teenagers enrolled in CCSD public schools.

Project: Books and Movies for Kids in the Hospital

One Child at a Time

If you can identify a Faculty Champion or a CCSD school or community program that might be interested in participating in PublicServiceNV’s Community Engagement Programs (the Serve.Learn.Inspire. Civic Engagement Education Program and the Gratitude Awards Program), please contact: